and School of Fine Arts

Offers New Insights on the Critical Eye of the Artist 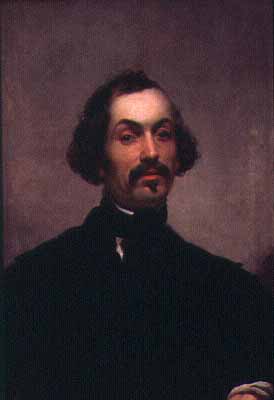 Noted painter Will Barnet, NA, takes on the role of curator this fall with the exhibition The Artist's Eye, which is the fourth in a highly acclaimed series of presentations at the National Academy. Previous Artist's Eye exhibitions have been selected by Philip Pearlstein, NA in 1993; Wayne Thiebaud, NA in 1994; and Jacob Lawrence, NA in 1996. For the first time in the program, however, its organizer draws upon the entirety of the Academy's noted collection of over 8,000 works, adding important sculpture and works on paper to the customary category of paintings featured in the series. A concurrent presentation of the curator's own work will be on view, offering an opportunity for further reflection. The Artist's Eye: Will Barnet Selects from the Permanent Collection is on view from October 8, 1997 through January 4, 1998. 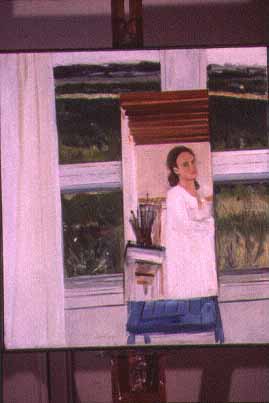 Jane Freilicher, Self-Portrait in a Miror

The Process: Behind the Scenes

Barnet's work in organizing the exhibition began in early 1996, with the first of several focussed visits to the Academy's on-site storage facilities. With paintings installed on special rolling screens--and particular areas for sculpture as well as works on paper--Barnet was able to review the entire range of work collected since the Academy's 1825 establishment. Barnet has continued to refine the exhibition in 1997 and will determine the placement of the works in the Academy's elegant 2nd Floor galleries this October. In an exhibition brochure for visitors, Barnet offers further commentary on the exhibition in a brief essay, which is accompanied by an interview conducted by the Academy's Chief Curator Dr. David Dearinger and its Assistant Curator Dr. Trudie Grace.

Barnet recently commented, "I am naturally attracted to the human form, and everything I do is in a large sense a portrait. It was natural for me to consider, `Why not do a portrait show?', since the National Academy has a history attached to its heritage such that up to a few years ago, the submission to the institution of a portrait, specifically, was required in order to become a full Academician. The Academy's storage racks are filled with portraits dating back to its inception in 1825. Coming through hundreds of portraits dating from the 1800s to the present, I found myself working with a collection contributed by artist members who didn't always realize that their contribution would represent them for posterity. With that in mind, I have chosen portraits that were of interest to me, some of which, I believe will stand the test of time."

Work by Will Barnet: An Opportunity for Further Comparison

For the additional grouping of work by his own hand, Barnet has selected paintings approximately 10 in number, which come from cultural institutions as well as private collections. Among the works are Portrait of Djordje Milicevic, Portrait of Ruth Bowman, and Portrait of T. M. M. In his figurative work, Barnet's use of compressed space creates a formal image that transends factual reality. His works offer a synthesis of the personal and universal, striving for an intriguing intimacy.

Born in 1911 in Beverly, Massachusetts, Barnet studied at the School of the Museum of Fine Arts in Boston (1927-30) and at the Art Students League in New York (1930-33), where he was an instructor between 1936 and 1981. He also been on the faculty of the Cooper Union, Yale University, Cornell University, the Pennsylvania Academy of the Fine Arts, and the National Academy School of Fine Arts. Barnet's solo exhibitions in museums include a retrospective at The Institute of Contemporary Art in Boston (1961) and traveling retrospectives originating at the Neuberger Museum of Art of the State University of New York at Purchase (1979), The Currier Gallery of Art in Manchester, New Hampshire (1985), and The Arkansas Arts Center in Little Rock (1991). Barnet has participated in group shows at, for example, The Albrecht Art Museum in St. Joseph, Missouri (1975), at the Minnesota Museum of Art in St. Paul, Minnesota (1975), and at The National Academy Museum (1996). He is also the recipient of various prizes and awards from The National Academy's Annual Exhibitions and from other museums and art associations. Barnet has received an honorary doctorate from the Massachusetts College of Art in Boston (1989). His work is represented the collections of The Metropolitan Museum of Art, The Museum of Modern Art, the Solomon R. Guggenheim Museum, and The Whitney Museum of American Art, in New York. Regionally, his work can be seen many collections, such as the Portland Museum of Art and the Farnsworth Museum, both in Maine. He became a National Academician in 1982.

A panel discussion on portraiture is a special highlight of the fall program season. Offered in conjunction with The Artist's Eye, the program, on Wednesday, November 12 at 6:30pm, features a lively and extemporaneous discussion with National Academicians Will Barnet, Everett Raymond Kinstler, among others. Questions from the audience will be actively encouraged by moderator Dr. Trudie Grace, a member of the Academy's curatorial staff. Reservations are required and may be made weekdays by calling (212) 369-4880. Fee: students and National Academy Friends, $5; general public, $8; FREE to registered students ofthe National Academy School of Fine Arts.