The Southern Alleghenies Museum of Art at Loretto is announcing the opening of its newest exhibition, Things, Thoughts & Imagination: Visual Journeys of Soul Mates. Opening August 7, 2009 the exhibition features the stylistically diverse work of Shirley Zampelli Sturtz-Davis and the late William D. Davis. The exhibition challenges viewers to find connections between the artists' strikingly dissimilar works while tracing their winding path of life, love and art. Things, Thoughts & Imagination will remain on view through November 7, 2009.

"Although the styles of these two masterful artists are very different, there are similarities in the complex subject matter and the uncommon attention to detail they share," said Bobby Moore, SAMA Interim Curator. "Shirley and Bill shared a deep love of family, art, music, gardening, and each other. They truly were soul mates. However, as artists, their visual journeys are unique and personal. This exhibition shares with you, the viewer, each of their personal visions -- and takes you along for a spectacular ride."

An artist for over 50 years, Sturtz-Davis is a watercolorist dedicated to still lifes and garden views. Her works often depict personally significant objects and exude an overall sense of fantasy, beauty and whimsy. A Lewistown native, Sturtz-Davis received a B.S. in Art Education and a M.A. in Studio Art from the Pennsylvania State University. She later worked as director of the Shippensburg University Fashion Archives and director of the Central Intermediate Unit 10 Arts in Education Program. Stutz-Davis has exhibited her art in numerous solo and invitational shows and is included in several public collections. Since 1993, she has been juried into over 150 international, national, regional or state shows in 17 states. She also is published in seven books or magazines and is a signature member of 10 watercolor societies.

In striking contrast to watercolor still lifes, Davis' graphite drawings and works in various media present viewers with a confusing but all-consuming reality. Often combining the childish with the gothic and the familiar with the unknown, Davis' works transport viewers to a dream-like world. Touted for his vivid imagination, knowledge of art history and love of teaching and gardening, Davis drew on a wide range of experiences for artistic inspiration. Davis, a native of Erie, received a B.S. in Art Education from Edinboro University and a M.F.A. in Printmaking from the Pennsylvania State University. He served as associate director of the Museum of Art at Penn State and retired as assistant professor of art from Shippensburg University in 2003. Davis exhibited his work in one-person, group, invitational, regional, state, national and international juried exhibitions and won numerous awards for his art.

Things, Thoughts & Imagination: Visual Journeys of Soul Mates celebrates the talents of two exceptional artists, watercolorist Shirley Zampelli Sturtz-Davis and the late William D. Davis, who worked in a variety of media, in a double retrospective exhibition. Although the styles of these two masterful artists are very different, there are similarities in the complex subject matter and the uncommon attention to detail they share.

Watercolor is one of the earliest known media used to illustrate people and places, and document events. The use of watercolor spans the chronicles of time and humankind. Primitive man used water-based pigments to record events on cave walls; the ancient Egyptians decorated the walls of temples and tombs as well as created some of the first works on paper, made of Papyrus. The first predominant styles in the modern sense emerged from the Far and Middle East when Chinese and Japanese masters painted on silk as well as handmade paper.

Some of the greatest American masterpieces were created in watercolor. Masters such as Winslow Homer, Edward Hopper, Thomas Eakins, John Singer Sargent and Childe Hassam used watercolor to create some of their greatest works. Although watercolor painting was perfected in England during the eighteenth and nineteenth centuries, today America's contribution to the tradition is unmatched anywhere in the world.

Watercolor is a water-based paint containing water-soluble pigments suspended in a solution of gum or glue. It is an unpredictable medium, requiring the artist to accept and embrace its lack of viscosity. It demands spontaneity and improvisation.

Watercolorist Shirley Zampelli Sturtz-Davis defies the laws of the medium in many of her works. Her explicit attention to detail is remarkable as she creates her paintings from still life set-ups comprised of objects she collected throughout her life. Sturtz-Davis' passion is still life, and her paintings are spectacularly presented to draw the viewers in and take them to a land of fantasy and beauty. The objects in these paintings hold strong personal meaning to her. Each painting tells a story. In her words, "The objects I use in my paintings need to have meaning to me, such as my grandmother's hand-crocheted doilies or my late father's violin. Each object is like a short story. I love thinking about an object's history ­ the how and why a thing came into my life. In a way, I've developed my own iconography. I refer to my still lifes as 'emotional content' painting."

Sturtz-Davis, a native of Lewistown, Pennsylvania, received her B.S. in Art Education and her M.A. in Studio Art from the Pennsylvania State University. She served as director of the Central Intermediate Unit (CIU) 10 Arts in Education Program, a partnership with Penn State from 1976 to 1989, and was then appointed director of the Shippensburg University Fashion Archives from 1989 through 1996. She retired from the Shippensburg University art department in 1998. Sturtz-Davis has been a practicing artist for over fifty years. Inspired by Stuart Frost, Chen Chi, Sondra Freckelton, and Carolyn Brady, Sturtz-Davis has a vision and style all her own.

William D. Davis also had a distinctive vision and style. His graphite drawings resemble dreamlike images, containing abundant juxtapositions ­ something that makes his work truly unique. The intense detail in Davis' works is unparalleled. Many of Davis' drawings express an eerie dark side to childhood memory-like themes. Davis explored other media and mastered other genres as well, such as silverpoint, printmaking and sculpture.

Drawing is the art of depicting forms or figures on a surface by means of lines. From Superior Paleolithic times, drawings were created to depict events and illustrate people, places and things. Homo sapiens drew images of the animals they hunted on cave surfaces or animal skin. Later, Egyptians used pictures or hieroglyphics to tell a story.

In the late fourteenth century, artists began to use paper frequently to explore ideas for a painting or sculpture. Subsequently, many artists have refined drawing as a distinct art form, and have made drawings which are complete and independent works of art. Prior to the use of photography, drawings were used in newspapers and journals to document and illustrate events.

Davis had long favored graphite as a medium because of its flexibility and mobility. His works represent his personal fusion of the real and imagined with a sinister twist. The ever-present organic material found in most of his works confirms his love of plants. Among his many talents, Davis was an avid gardener.

Born in Erie, Pennsylvania, William D. Davis received his B.S. in art education from Edinboro University and his M.F.A. in printmaking from the Pennsylvania State University. From 1972 to 1985, he was associate director of the Museum of Art at Penn State. Davis taught art at all grade levels from 1961 to 1971. He retired as assistant

professor of art from Shippensburg University in January 2003. During his lifetime, William D. Davis touched many lives, and his memory will live on in his artwork as well as in the hearts of those fortunate enough to have known him.

Shirley and Bill shared a deep love of family, art, music, gardening, and each other. They truly were soul mates. However, as artists, their visual journeys are unique and personal. This exhibition shares with you, the viewer, each of their personal visions -- and takes you along for a spectacular ride.

It is with heartfelt sincerity that I extend my gratitude to the following individuals for their contributions to make this exhibition possible. Donna M. Jones, for her generous creativity and hard work designing this beautiful catalogue; Shirley Zampelli Sturtz-Davis, for being one of the most amazing people I have ever met; Lee Rummel and Steve

Kuzma for their excellent skills of installation; Glenn Garrett for his constant invaluable assistance; and the entire staff of the Southern Alleghenies Museum of Art. I also thank all of the private lenders, Palmer Museum of Art, The Pennsylvania State Museum, The State Museum of Pennsylvania, and the Washington County Museum of Fine Arts, all of whom generously lent their beautiful works of art to this exhibition. 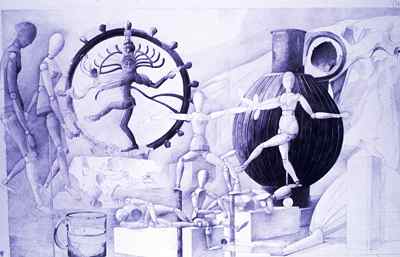 Read more articles and essays concerning this institutional source by visiting the sub-index page for the Southern Alleghenies Museum of Art in Resource Library.

Visit the Table of Contents for Resource Library for thousands of articles and essays on American art.