A Sense of Place: Location Studies by Joseph McGurl

The Cahoon Museum of American Art's spring exhibition "A Sense of Place: Location Studies by Joseph McGurl" will feature about 40 works by a 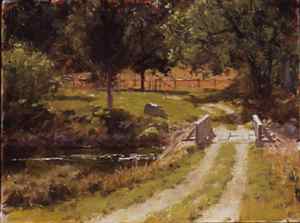 contemporary artist who lives in the Cape Cod village of Cataumet, but whose reputation as a landscape painter is nationwide. The show will open March 23, 2004 and run through May 1, 2004. (ight: Joseph McGurl, Field Study, Island Road, oil on canvas, 12 x 16 inches)

The focus of the exhibition will be the small plein-air oil studies that McGurl does on a regular basis -- up to five a day in the summer, when the days are long. Occasionally, one of the pieces becomes the springboard for a major work. Mostly, "they're for study," the artist says, "a way to become more familiar with the world I'm painting." Unlike many contemporary landscape artists, he never bases paintings on photography, much preferring the immediacy of learning from nature directly. "It's like continuing education," he says. "You paint the same subject five years later and you're seeing something different -- or you're painting it differently."

Spending time outdoors is almost a form of meditation for him, McGurl says. It helps him understand not only how nature looks, but how it feels. This "spiritual aspect of nature" is something he works hard to convey through his sensitive handling of light, atmosphere, space, distance and texture. "That's an elusive thing to capture, but it's one of the things that I'm thinking about constantly when I'm doing a painting."

In addition to painting frequently around his home on secluded Squeteague Harbor, McGurl takes frequent painting trips to the Yosemite and Monterey areas of California and up north to the White Mountains and Mount Desert Island, often in the company of fellow artists William R. Davis and Donald Demers, with whom he's close friends. The field studies in "A Sense of Place" will also include views of farmhouses in Normandy and Italy, a brook on Martha's Vineyard, a summer day at Nantasket Beach, a harbor in the Bahamas and the Old Faithful geyser in Yellowstone National Park by both day and night. A highlight of the show will be three of the artist's major works, each paired with the field study that inspired it.

A Needham native who grew up in Quincy, McGurl received early training from his father, James McGurl, who specialized in murals and decorative painting. He later attended Massachusetts College of Art, where, feeling pressure to produce something other than "pretty scenes," he painted urban scenes with a touch of grittiness. "I stopped painting them when I realized I didn't like my work," he says. Once he began being true to himself by painting landscapes, he started selling virtually everything he painted. He's currently represented by Tree's Place in Orleans, Robert Wilson Galleries on Nantucket, Hammer Galleries in New York and John Pence Gallery in San Francisco.

McGurl has won awards from the Salmagundi Club in New York, the Guild of Boston Artists and the Copley Society of Boston, where he was the youngest member to ever be named a Copley Master.

An opening reception will be held from 5 to 7 p.m. Friday, March 26. Refreshments will be served, and Bob Schneider will provide live music on piano. (Please note: The opening for "Faces From the Past: Portraits by Cephas Thompson and Cephas Giovanni Thompson " is scheduled for the same time.) The following "Tuesday Talks" have been scheduled in conjunction with the show: Artist Joseph McGurl will give gallery talks at 11 a.m. March 30 and April 20.

"A Sense of Place" has been generously sponsored by Michael and Jeanne Lazor of Cotuit and Henry and Sharon Martin of Washington, Conn.

Visit the Table of Contents for Resource Library Magazine for thousands of articles and essays on American art, calendars, and much more.