Editor's note: The following essay was reprinted in Resource Library on January 31, 2006 with the permission of the author and the Ulrich Museum of Art at Wichita State University. If you have questions or comments regarding the essay, or wish to obtain a copy of the exhibition brochure from which it is excerpted, please contact the Ulrich Museum directly through either this phone number or web address: 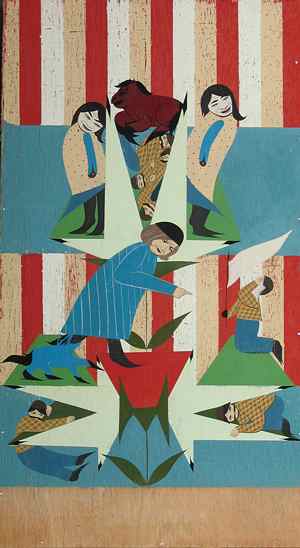 (above:  Clare E. Rojas, Untitled, 2005, acrylic and gouache on panel, 9 x 11 inches. Courtesy of the artist and Kavi Gupta Gallery)

San Francisco filmmaker, singer, and painter Clare E. Rojas is not a folk artist. It might be hard to tell this by looking at her intimate gouaches and large installations that reference Pennsylvania Dutch hex signs, Russian nesting dolls, and American comic books. And while she did attend art school, Rojas's craft like work draws from universal themes in folk art-utility, community, individuality, and symbolism. Like a hand-made quilt, Rojas's work acts as an index to a particular culture and time. Yet Rojas's culture does not exist. It is a culture that is wholly imagined, a sheltered space for women containing broken fragments of narrative-a constructed fantasy world where girls strum banjos on the back of striped horses and a bear woman tenderly holds a mustached man in her hands.

Rojas illustrates her made-up world through carefully detailed gouaches on panel and paper. The flat images and limited color palette recall printmaking, a media Rojas studied as an undergraduate at the Rhode Island School of Design. These small, knowingly naïve works straddle both a primitive nostalgia and our current culture as characters appear and reappear in different fantasies: women and men, and women and animals connect in both quiet and charged moments. A colored beam strikes out of a dark-haired girl, impaling the man who stands before her, a cartoon heart popping out of the backside of his body; in another painting, the tables turn as the boy impales the girl with the same bright beam. 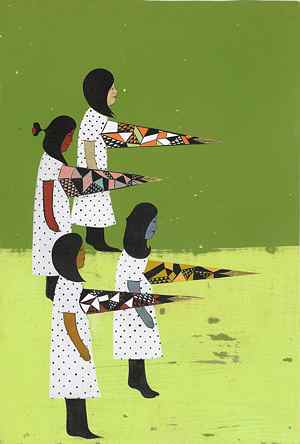 Rojas is constantly subtly poking fun at gender roles and representations of women in our current media creating a commentary that is at once ironic and funny but also deeply critical . She draws from the vernacular of the craft movement, something often associated with "women's work," to create an allegory on how women are perceived in our contemporary culture, a culture that undresses women not to celebrate sexual freedom but to turn a profit. In Rojas's narrative, nature acts as a refuge from the bombardment of degrading images of women: "I can be in a beautiful natural surrounding and be healed from the traumatic everyday experiences I feel from living in the city where I am being personally attacked with degrading, conditioning imagery of women either objectifying and exploiting themselves or having it done to them."

While Rojas's gouaches may create an alternate world where women can escape contemporary projections of women's bodies, her spare drawings of naked men spoof the ridiculousness of the poses in which women are often portrayed. Cartoon men strike suggestive poses, mimicking the women found on the covers of men's magazines. One naked man's penis flaps in the wind as he runs, while another undresses, a come-hither look on his face. In these works Rojas's humorous interpretations become a serious meditation on how we have chosen to accept perceived images of women. The images complicate our understanding of men and women's sexual roles, exploring issues of eroticism, both real and constructed.

Clare Rojas's life-size installations extend the imagery started in her gouaches. In a recent exhibition in London, the details of the previous small work are abstracted into enlarged quilt-squares and images suggestive of Native American and Swedish designs. The characters in the gouaches appear again in the large wall-works and sculptures, creating action amidst the careful patterns. Rojas sees the installations as a refuge for women, "I want all women to be able to walk into my space and not be bombarded with imagery that has negative value to her." Rojas's imagined culture where women rule becomes inhabitable within the confines of the gallery as the spectator is wrapped in the artist's folklore syntax.

The large-scale installations often act as a stage for Clare Rojas's musical performances. At most of her exhibition openings, Rojas performs as one of the characters that often appear in her paintings, Peggy Honeywell. The songs are lilting folk music and further create the safe haven of Rojas's imagined world, as she sings in the simple and mesmerizing Peach and Yellow Skies: "Angel bright/ She came tonight/ And held my hand/ And we out ran/ Everything that is bad." These songs work as another layer in the creation of Rojas's made-up culture, acting as a type of soundtrack to her paintings. 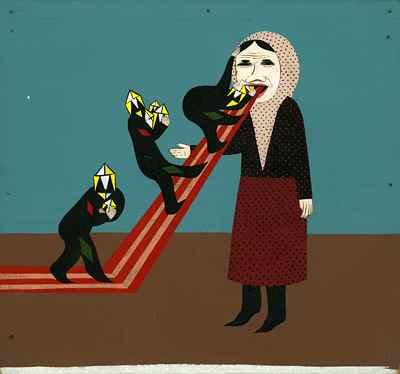 (above:  Clare E. Rojas, Untitled, 2005, acrylic and gouache on panel, 8 x 8 inches. Courtesy of the artist and Kavi Gupta Gallery)

Rojas's appropriation of folk imagery to address contemporary female social concerns is reminiscent of 70s feminist art like that of Miriam Shapiro and Judy Chicago. Unlike these artists, Rojas embraces a dark and cutting ambiguity -- women traverse surreal landscapes allowing crystal-headed figures to climb into their opened mouths or are found scolding men who are hiding amid graphic shapes. Throughout the works Rojas's characters move between the passive and aggressive, wanting both to be dominated and to dominate. It would seem that if these images were placed side-by-side, like the panels in a graphic novel, then the full story of these characters might emerge. Yet, when positioned in a line, as the gouaches often are in exhibition, instead of a straight narrative, the work evokes straight sensations-feelings of love and loss, a landscape and culture at once both familiar and unfamiliar.

The very fact that strides in feminism have seemingly regressed since that heady period of 1970s feminist art is most apparent to Rojas, "The feeling of loss in my work, is my feeling of loss of hope. The struggle to find the good and the beautiful and represent it is my challenge. Understanding the ugliness that finds its way into our culture is crucial." Rojas's beautiful uses of allegory and of an imagined cultural landscape in her paintings act to subvert our current accepted perceptions of women. It allows the spectator an engagement with an alternate evocative world that is both funny and sad and that points to the complexities of being a resilient female in the twenty-first century. Rojas often depicts women alone, standing amid a flattened forest landscape, but this is not to suggest that they are lonely. No, Rojas's women exist in their own reality, feeling peaceful, protected, and quiet.

Katie Geha is Curator of Modern and Contemporary Art at the Ulrich Museum at Wichita State University. She received her MFA in Art History, Theory and Criticism in 2004 from the Art Institute of Chicago. She has previously worked at the Whitney Museum of Art and the Pollock-Krasner Foundation

Clare E. Rojas is a presentation of the Ulrich Project Series, being held February 2 - March 12, 2006. Recalling iconic folklore images and the dark underbelly of too-sweet fairytales, San Francisco painter Clare E. Rojas develops her own personal, esoteric myths with repeating characters that interact and travel through lyrical landscapes and environments. Rojas's dreamlike installations, panel paintings, drawings, and gouaches create an environment where unexpected meetings between little girls and androgynous characters, monsters, and personified animals occur in surreal lands dotted with misplaced trees and flowers. A Musical performance by the artist as Peggy Honeywell is being held at 4 p.m. Thursday, February 2, followed by a reception/preview from 5 to 7 p.m.

About the Ulrich Museum of Art

The Ulrich Museum of Art, an integral part of Wichita State University, was established in 1974 to enhance and support the university's educational and service mission. Since its founding, the museum has served as Wichita's premier venue for contemporary works by established and emerging artists of national and international significance.

The Museum is located in the southwest corner of the Wichita State University campus. When traveling to the museum, look for the large, colorful mosaic on museum's front entrance. The Ulrich Museum of Art is accredited by the American Association of Museums and is one of only four accredited museums in Wichita. Please visit the Museum's web site for hours and admission fees.

Visit the Table of Contents for Resource Library for thousands of articles and essays on American art.